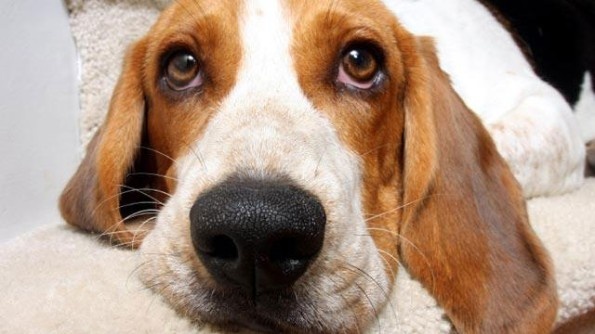 Imagine if your dog could sense when you’re about to pass out — and do so in enough time to stop it.

Now, imagine that all they need is their nose.

This scenario is a reality for hundreds worldwide, including Claire Pesterfield, a pediatric diabetes nurse at Addenbrooke’s Hospital in Cambridge, United Kingdom. Pesterfield has type 1 diabetes, a form of the condition in which the pancreas is unable to produce any insulin and cannot regulate blood sugar. Her sugar levels can fall dangerously low — known as hypoglycemia — causing shakiness, confusion, disorientation and potentially unconsciousness.

But her golden Labrador retriever sidekick is ready to alert her before it kicks in, day or night.

“If he smells a hypo coming, he’ll jump up and put his paws on my shoulders to let me know,” Pesterfield said.

Her dog, Magic, is one of 75 medical alert assistance dogs trained by the UK charity Medical Detection Dogs to help people monitor a range of health conditions, including type 1 diabetes. About 10% of all people with diabetes are estimated to have type 1, in which the risk of hypoglycemia is far greater.

The dogs have been in service since 2009, trained to detect changes in their owner’s breath when blood sugar declines, but the precise scents they’re picking up have remained largely unknown — until now.

Narrowing down the scent

“We’re interested if there are messages coming off the body at different blood sugar levels, either on the skin or breath,” said Dr. Mark Evans, a consultant in diabetes and general medicine at Addenbrooke’s Hospital and a lecturer in general medicine at the University of Cambridge.

In a recent study, Evans explored 10 chemicals released on the breath of eight volunteers with type 1 diabetes when sugar levels become critical. He found that one chemical almost doubled in quantity: a compound called isoprene.

Identifying the compound could lead to its use in technologies, such as a breathalyzer, to monitor blood sugar on the breath of people with diabetes, just like a dog does.

“Humans aren’t sensitive to the presence of isoprene, but dogs, with their incredible sense of smell, find it easy to identify,” Evans said.

Patients currently test their blood sugar using a prick test, but new technology could offer a noninvasive means of tracking changes to benefit patients without dogs like Magic at their side.

“The dogs are already out there but are in limited supply,” Evans said.

The findings are also limited, as patients were monitored in the lab, and only eight people were tested, all women. “The caveat is, we’ve done this in a very controlled setting… We need to do real-world testing,” Evans said.

In addition, it’s likely that the dogs are sensing more than just isoprene.

The study “is well-done and presents a possible biomarker that we could measure on human breath to indicate hypoglycemia … [but] in addition to isoprene, there may be other physiological and behavioral responses in people that they are picking up on,” said Nancy Dreschel, an animal behavior expert at Penn State University.

A finite, and expensive, supply of dogs

“It’s not practical for everyone to have a dog, and they’re expensive to train,” Evans said. The average medical assistance dog costs more than $16,000 to train, and once ready, the dogs are in high demand.

About 40 puppies are in training to join the 75 dogs currently in action with Medical Detection Dogs in the UK, but only people with the most severe cases of a condition can access them. Even then, there is a waiting list, according to Claire Guest, CEO and founder of Medical Detection Dogs.

Organizations training dogs to deliver these services in other countries face similar limitations.

“We’ll never be able to train enough dogs, but there is a huge unmet need in Minnesota [alone],” said Alan Peters, executive director and founder of Can-Do Canines, a charity providing trained assistance dogs to people with disabilities, including type 1 diabetes, in Minnesota and Wisconsin. “If they can prove this is really happening with isoprene, then maybe someone can create this device.”

Guest says her dogs have reduced hospital admissions for hypoglycemia among clients whose dogs have been able to warn them in enough time to prevent their sugar levels from becoming critical. Evans hopes the numbers can be greatly improved through the development of more widespread technology.

But Guest believes dogs will be crucial in this development and will never be out of a job.

“Machines are brilliant, but dogs are too and have different applications,” Guest said. “Dogs are adaptable and can work in different environments and work even if a person forgets to take their test.”

They are also more attentive during a night shift. “They are extremely good at night … as people sleep,” she said.

To truly beat the dogs, passive monitoring is needed day and night.

Evans hopes to develop a “smart pillow” with sensors that monitor someone’s breath as they sleep. “At night, people are less likely to pick up any changes, and today, it’s possible to do remarkable things with technology,” he said.

“If a person could wear a device that monitors their breath and alerts them, that would bring huge benefits,” Peters said.

For now, experts such Guest and Peters see the findings on isoprene as merely scratching the surface but hope this greater insight could help organizations like theirs better train their dogs. “If they can tell us what the number [of this chemical] is as blood sugar drops, we could be using this instead of saved breath samples,” Peters said.

Either way, there is hope in sight — or scent.
Source: News Feed