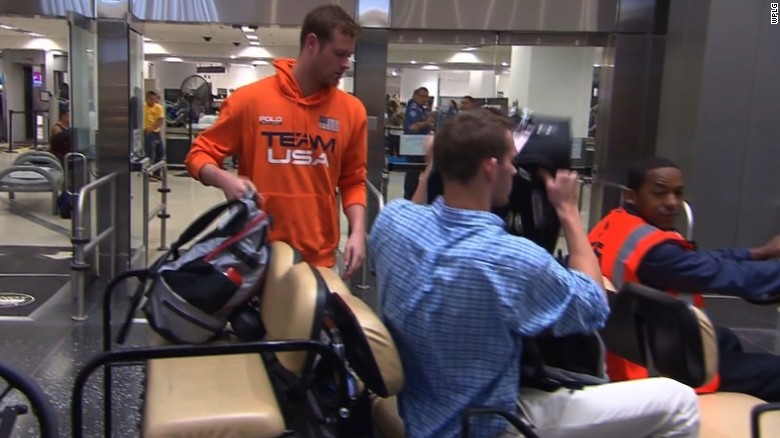 A decorated American Olympian says he and three of his teammates were robbed at gunpoint.

After days of confusion about what happened to Ryan Lochte, James Feigen, Jack Conger and Gunnar Bentz, there’s now closed-circuit TV footage of much of the incident early Sunday at a gas station in Rio de Janeiro.

Bentz and Conger gave statements Thursday denying having been victims of a robbery and said the version of events presented by Lochte was not true, Rio’s civil police said.

The US Olympic Committee CEO apologized for the incident after the video emerged, showing apparent lewd behavior by the swimmers at the gas station.

But there has been no word from Lochte over the events that led to what he called a robbery.

They do all agree on one thing: A gun was brandished, and money exchanged hands.

The stories, however, seem to diverge at a single point — when Lochte re-entered a taxi after stopping at the station.

Police said that at least one of the men had vandalized a mirror and a sign, and urinated on the premises at the station.

The video footage appears to support some of these assertions and shows security officers then demanding the men get out of their taxi. Police said the officers likely used guns “to control” the men.

The athletes agreed to pay 100 Brazilian reals ($20) to cover the damages to the property before driving away, police said.

The US Olympic Committee confirmed the four swimmers had stopped at the station to use a restroom, where one of them committed an act of vandalism.

“The behavior of these athletes is not acceptable, nor does it represent the values of Team USA or the conduct of the vast majority of its members,” Scott Blackmun, the US Olympic Committee’s CEO, said in a statement. “We will further review the matter, and any potential consequences for the athletes, when we return to the United States.

“On behalf of the United States Olympic Committee, we apologize to our hosts in Rio and the people of Brazil for this distracting ordeal in the midst of what should rightly be a celebration of excellence.”

The statement said that an “argument ensued between the athletes and two armed gas station security staff, who displayed their weapons, ordered the athletes from their vehicle and demanded the athletes provide a monetary payment. Once the security officials received money from the athletes, the athletes were allowed to leave.”

The incident has given way to a hashtag battle on social media, with some referring to it as #LochteGate and others preferring #Lochtemess.

Twitter users were divided, with some throwing their support behind the champion swimmer and others branding him a liar.

Though the US committee apologized, the statement still largely corroborates Lochte’s account: The four were in a taxi, a gun was brandished and money was exchanged.

Conger and Bentz were pulled off a plane Wednesday night as they were preparing to return home after a Brazilian judge issued warrants for the seizure of the Americans’ passports so they couldn’t leave the country before questioning. Police say the men told them they were not robbed.

They’re now on their way home, according to the US committee.

While it is possible that criminal charges might be sought against one or more of the athletes, it is unlikely at this point, civil police Chief Fernando Veloso said.

The other potential charges include false communication of a crime, but these also seem unlikely since the athletes did not bring their charges to authorities, he said.

“This kind of crime will not lead to their arrest,” Veloso said.

An attorney for Lochte, Jeff Ostrow, on Thursday brushed off suggestions of conflicting stories, saying the four swimmers’ accounts “are 95% consistent.”

He said his client, who won his sixth Olympic gold medal in the pool in Rio, has been cooperative with authorities and has not been asked again for assistance. Brazilians are working with US authorities to get Lochte interviewed, Veloso said.

Lochte left the country before the warrants were issued.

The police early on had doubts about the 32-year-old swimmer’s veracity.

First, they learned on social media that four Americans had reportedly been mugged — a story Lochte told in hair-raising detail to the US media — Veloso said at a press conference Thursday.

They tracked down witnesses, including three of Lochte’s fellow swimmers at the scene, reviewed surveillance tapes and made a ruling on whether the accounts looked or sounded like a robbery.

“The surveillance tapes show that there was no violence against the athletes at the gas station,” Veloso said.

“Their claim that they are a victim of an assault or robbery or any kind of violence is not true.”

Veloso said the other swimmers say it was Lochte, who created the lie. “The only person that continues to say there was a robbery is (Lochte),” Velso said after the press conference.

The investigation showed security guards stopped the athletes from leaving the station until police could be called about the vandalism. One pulled a gun on Lochte after he became angrily confrontational, Veloso said.

But Veloso insisted there was no evidence the guard’s actions were unreasonable, and he only used the gun to control Lochte, whom the police chief described as drunk.

He emphasized, however, that the ongoing investigation still had not conclusively assigned blame.

Lochte stuck to his story for days but hasn’t made a statement since the video emerged.

Two sources told CNN the exchange of money at the gas station was not a negotiation. The guards made a money gesture with their hands and regardless of how it started, the swimmers had a gun pointed at them and they were not allowed to leave until they had given the money, the sources said.

The sources said the athletes admitted urinating behind the building and then the men showed up and one held up a badge. Soon the athletes were handing over money, although the sources did not say how much.
Source: Sports

After Istanbul Attack, Security Stepped Up at U.S. Airports for Holiday